Chatting with Danilo Callegari: stories of an extreme adventurer 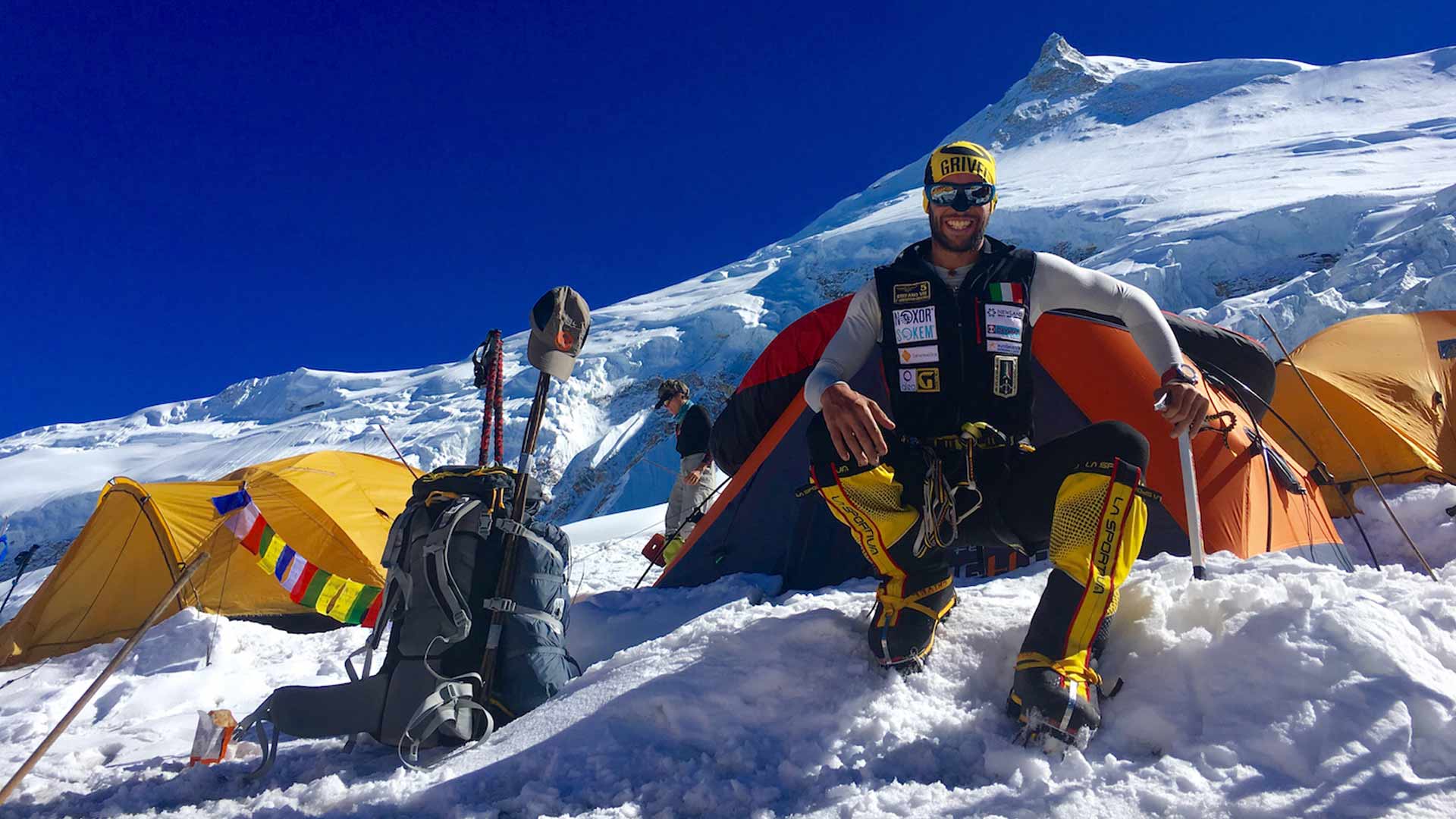 Danilo Callegari is an Italian extreme adventurer who loves nature in all its forms, even when it gets irreverent and dangerous. His passion for exploring beyond his limits, beyond fear, beyond what’s imponderable, has brought him to the most remote places on Earth, on the most impassable mountain tops, in the deepness of oceanic waters and on immense desert and frozen expanses.

Cargo Compass, which plays the role of partner and supporter in his expeditions, supports Danilo in every new adventure by meticulously organizing the transportation of all the equipments and instruments needed to complete his immense solitary trips.

In this new interview Danilo will tell us about these trips and reveal curiosities and anecdotes about some of his most memorable adventures around the world.

Danilo, we know about your passions. You’re an adventurer who loves travelling alone and your expeditions definitely prove it. What drives you every time to confront your limits and accept these extremely challenging adventures?

The passion for adventure. But also the awareness, rather the certainty, that limits exist only in our heads. The rest is just clarity and readiness. I love nature with all its spontaneities and its unexpected events. What I feel during every adventure is life for me, but it’s also the feeling that keeps me alert, awake and vigilant in order to overcome those unexpected events that would cost me… a lot. Coming back home after every trip is always thrilling: I’m an extreme adventurer, but also a careful and alert planner. And it couldn’t be different.

So, let’s talk about one of the core topics of today’s interview: unexpected events. Did something ever occurred to you? You surely had a lot of adventures in extreme conditions. Did you ever find yourself in some sort of unexpected situation?

A quite absurd event happened to me in South America during the two-weeks kayak crossing of the Titicaca Lake, between Bolivia and Peru, in 2011. That was at the end of my 4-months adventure. The tools I bring with me from Italy are necessary both for the activities I have to do and for basic survival and, among all things, during that kayak crossing, I brought with me an hyper-technological mobile phone that could resist 10 to 15 meters underwater. I’m so used to check the time on it rather than on my watch that, while I was trying to take it out of the pocket, it fell underwater before I even noticed and it left me with no time to even try to catch it. I was just 8/9 km from the river, after a 300km trip so… I didn’t mind! 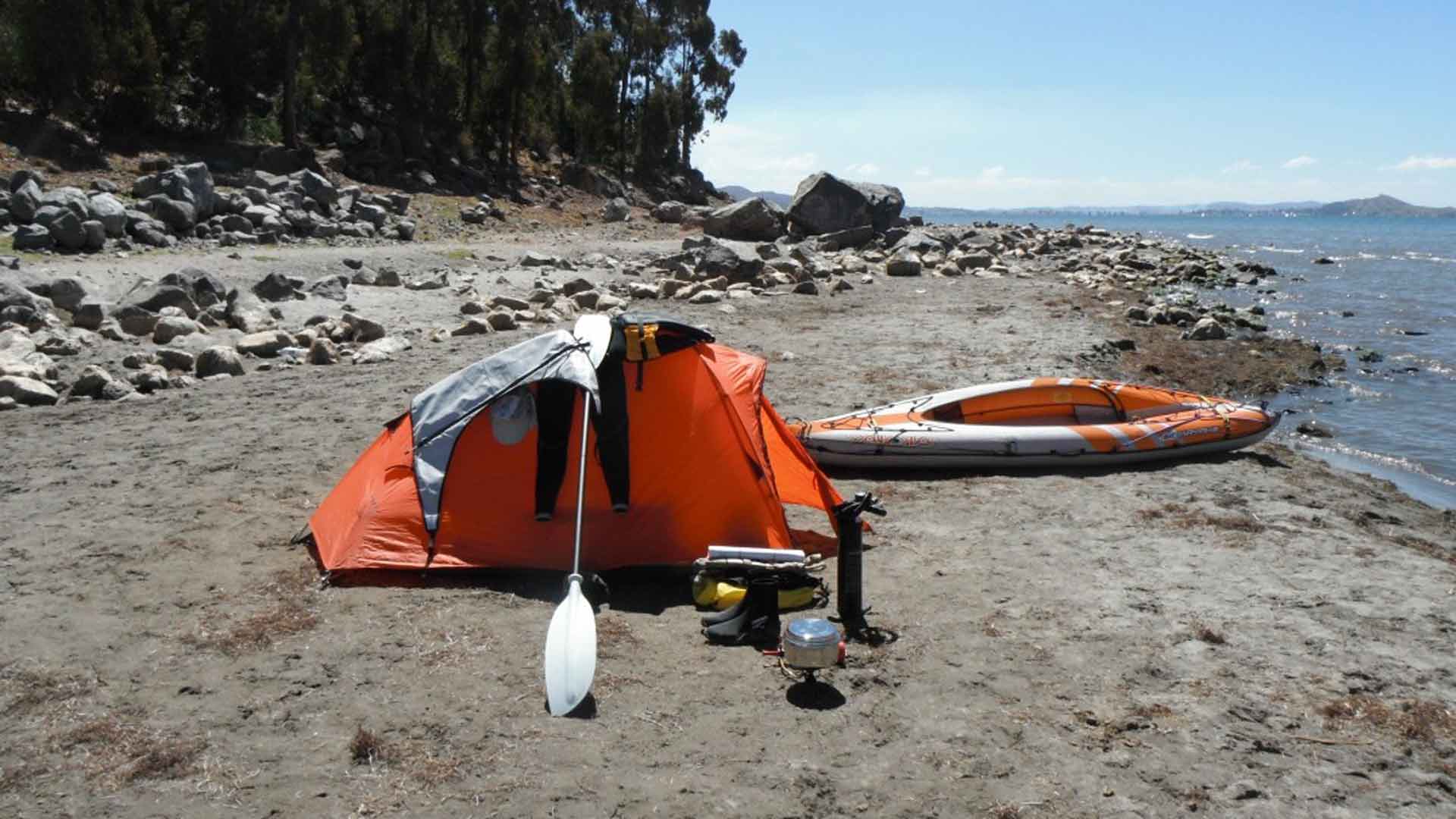 Another quite peculiar experience happened in Antarctic. Again, I’m quite scrupulous when it comes to organizing the shipment and I always double-check and triple-check if I have everything I need and only then I program the shipment via cargo vessel. During that trip I brought with me two enormous solar panels… I could have charged I skyscraper with that! In addition, I brought another smaller and less powerful panel that I’ve had for a long time. Once I got to the American base I was getting ready to leave the next day and I decided to bring with me only one of the big panels plus the small one, so that I wouldn’t have to carry too much weight. Today I can say that that was a wise choice, because after 10 days the big panel abandoned me (the inverter broke down) and I went crazy trying to recharge the satellite modem, the GPS and other vital tools with just a small solar panel! Imagine what it was like to go through an adventure like that in such conditions.

Another memorable experience happened to me in Tibet, on the Himalaya, at around 7000 above the sea level. I pitched the tent at the base camp and continued to camp 1 and camp 2 with everything I need for these kind of solitary expeditions: burners, sleeping bags, backpacks etc. In between camp 1 and camp 2 I decided to leave my 115lt backpack at camp 2 and take with me just the 20lt backpack  in order to have less weight to carry. The problem was that I left my pocket inside that backpack with all my money, my credit cards and my passport in it! When I came back to camp 2 to retrieve what I left there I found out that the tent had disappeared under the snow! My whole world fell apart. I had lost everything and was left with nothing: no money, no clothes and no visa to get in and out of China, Nepal and India. Of course I needed all of this because right after the climbing the program was to bike across Nepal and India. Moral of the story is I fortunately managed to conclude the adventure and the 5000km trip on my bike, but only after a long and struggling series of events that included a lot of visits and phone calls to various embassies and offices to obtain provisional visas and a passport. It was a very risky situation because moving from one country to another without any document is an impossible challenge… probably harder than climbing an arduous mountain!

That was definitely an adventure that wasn’t planned! By listening to these stories we can surely imagine that if something is by accident forgot at home… It would be serious trouble! I’m referring to the objects you need during tour expeditions and that you often mentioned…

Absolutely! I get anxious only thinking about it. The success in these kind of extreme adventures first of all comes from the meticulous planning of every step of the journey. This means that it’s not only about planning my trip, but also the trip of the tools I need. All the materials I need travel via cargo and when I arrive, they need to be there, ready to go with me. I couldn’t have explored Antartic without my sled, that was shipped from Italy and flew through various European cities, Brasil, Chile and then was shipped by land. If anything goes missing the whole trip would risk to fail and that would be an enormous problem. In fact, for every planned adventure there’s a lot of organizational work behind, that involves investments in communication, sponsors and much more. We’re talking about expeditions that, if failed to start for a logistic problem, could create a serious damage in terms of money and, of course, image. That’s why I meticulously plan every detail of the trip before leaving and always make sure that everything is ready thanks also to the help of Cargo Compass, who has been following me as a true “guardian angel” for years now, by organizing the shipment of all the materials I need all around the world. 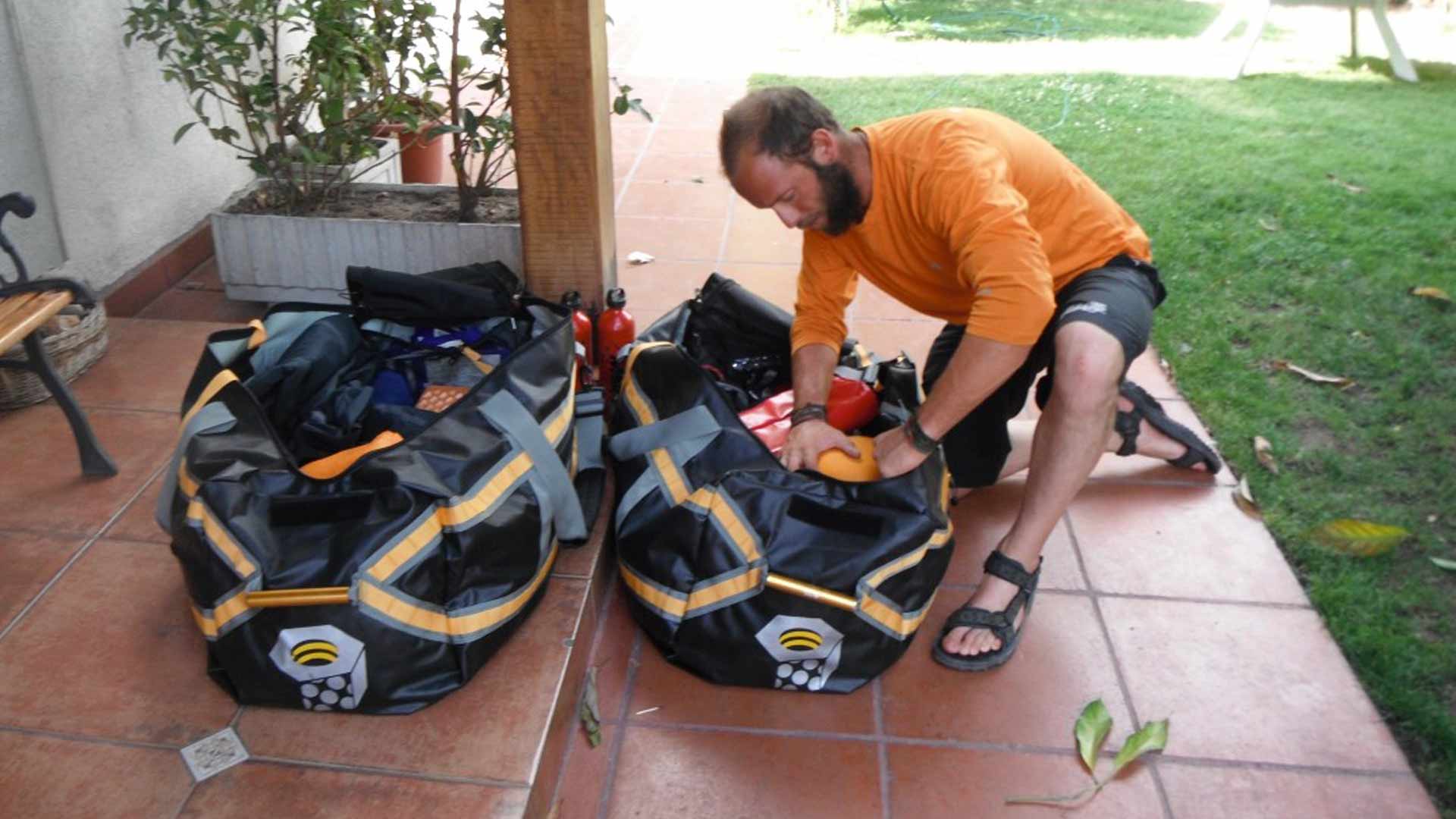 Especially when it comes to dangerous materials, such as particular kinds of batteries or other tools, how could I make sure that everything is okay with the customs if I hadn’t someone who could manage these duties for me? I wouldn’t have time to do it. The certainty that I’m receiving everything I need on time and with no accidents is priceless for me, if you consider the loss I would have to face if I planned the shipment with too much approximation.

And now a question on a very current and delicate topic: the Earth’s state of health. In the various remote places you visit during your adventure, how much does the human presence impact on the environment? Since you’ve had the chance to literally see it, how bad do you think things are with the trash, plastic and pollution management?

Well, I’d definitely say that the human presence is quite visible: unfortunately there are quite a few areas on Earth that have remained unpolluted. The human trace can be easily recognized because of the presence of trash and polluted air. The few times I had the opportunity of finding myself in an unpolluted place, I immediately perceived the difference. Everything changes, from the climate to the environment. The problem is that the health state of a lot of areas on Earth is linked to the mistakes made by countries, big cities and small villages of enormous continents such as Asia for example, where it is very difficult to maintain a certain level of environmental control and hygiene. In Asia there are some religious rituals that require to take a bath in the Ganges waters in order to purify oneself. The Ganges is unfortunately one of the most polluted rivers of the world, and to this day a lot of people follow this kind of rituals even if researches and studies have shown how the river is responsible for diseases and high mortality rates. I’ve also seen a lot of people throwing plastic bottles like it’s nothing on the Goa oasis or in Delhi. It feels like there’s no difference for them!

Pollution is a problem that involves a lot of areas where there are no recycling policies and plastic gets burned. During my crossing in India I have breathed dioxin for at least 3700km with a high level of humidity in the air. If we add to that all the smog caused by cars and heavy good vehicles used for transportation, the picture we get is quite alarming.

As an extreme nature lover, how do you face the pollution problem? Do you make particular choices to reduce your impact on the environment?

I have found myself in places where there was no trace of trash containers, and I’m not talking about wild areas that can be crossed only by carrying everything with you and waiting to find a civilized spot as soon as possible. In some cases, even where you think you could find at least some signal of civilized society, there’s no trace of containers! I carry everything with me as long as I can and try not to leave any trace of my passing. But there’s also the pollution caused by CO2 emissions to be considered: a kind of pollution to which everyone contributes, often without thinking about it, through transportations and travel. Considering that, even maximizing the effort, it is impossible to have zero impact in traveling to certain places, I feel the need to do something more in order to reduce those emissions that kill both the air and the environment.

Cargo Compass is promoting a very cool initiative called Eco4Cargo to which everyone can participate in order to reduce the pollution caused by the transportation of goods. I find it to be a very beautiful initiative of green shipping, a philosophy that every company should embrace and that should be promoted as much as possible since it allows everyone to become responsible and concretely act for our own wellbeing and for the wellbeing of the environment. I definitely support this initiative, first of all for my health, but also because I love nature and all its wonders.

Projects for the future?

It’s still too early to talk about it but… I’m always onto something! 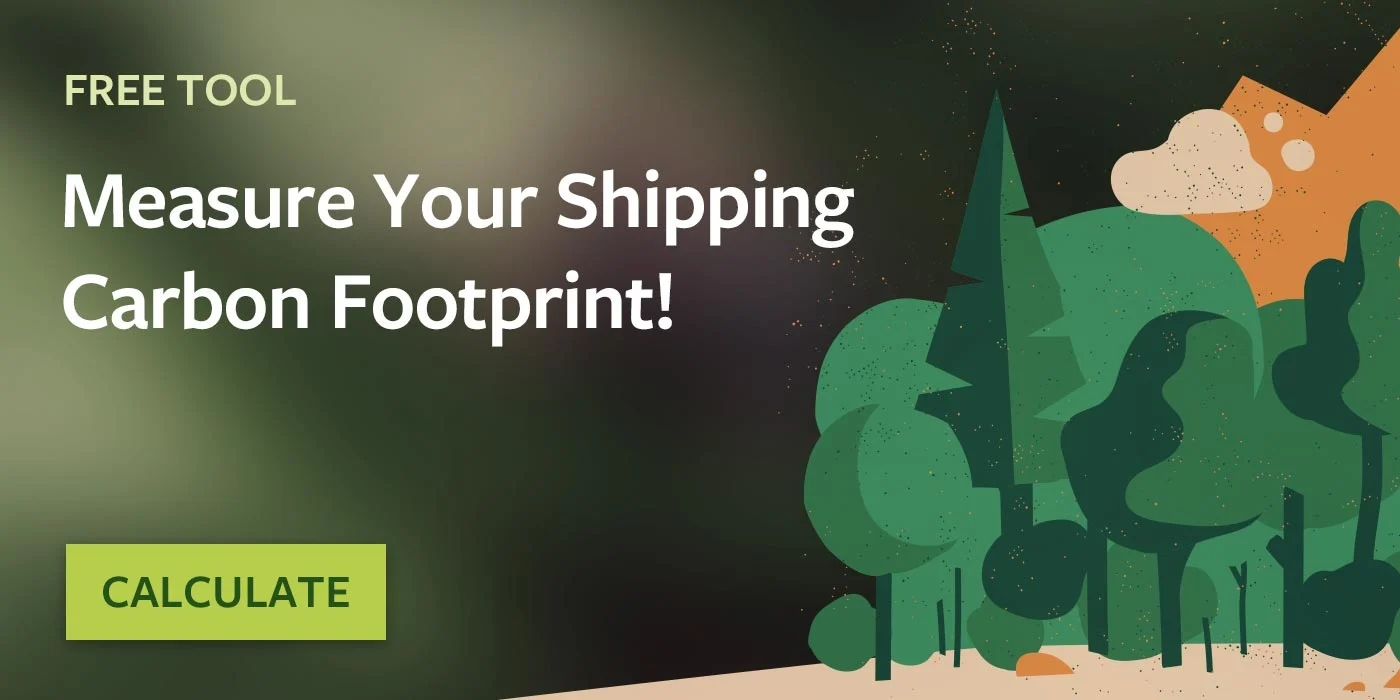 Danilo Callegari is an Italian extreme adventurer who loves nature in all its forms, even...Read more